The Construction Industry in the Current Economic and Political Climate

What does the re-election of the Turnbull government (even if just by the slenderest of margins) mean for the Construction industry in this current economic climate?

Even though most people have forgotten, the election was called in response to the Coalition’s senate bill to re-instate the Australian Building and Construction Commission (ABCC).

So what is the ABCC?

It is a “watch dog”, with an aim to regulate the construction industry with a particular focus on monitoring union officials. It was set up by the Howard government in 2005, after a Royal Enquiry found the CFMEU to be disregarding the law and abusing its power.
In short the Liberal Party is in favor of the ABCC, and the Labor Party opposes it, as it limits the power of unions and “denies people’s right of representation” when involved in workplace disputes, says Labor’s Brendan O’connor. This fundamental disagreement led to Malcolm Turnbull calling an early election.

With the Coalition to remain in government, they will most likely look to pass this bill, bringing the ABCC back to power.

If you have been following this election, or even if you haven’t, you’ve probably heard the phrase “Jobs and Growth” on a daily, if not hourly basis..

How does the Liberal Government plan to create jobs and growth?

An example of how this would work is a small carpentry sub-contractor, lets call it Dave’s Decks. In theory Dave would now pay less tax each year, 2.5% less than previous years. The liberal government would expect Dave to spend this “extra” money on equipment such as new drills, saws and maybe even a new Ipad, and also he would hire a new employee to grow his business. In theory his business would become more productive, employees would receive higher wages, and would spend their extra money throughout australia, growing the economy. Also known as trickle-down economics.

However the contentious issue is whether the tax savings would actually be passed back through the economy, or would the business’s simply pocket the savings. Many economists also believe the increase in growth and jobs would be very small in the long term.

Currently interest rates in Australia are at an all time low, meaning that the cost of borrowing money is very low. Investors and companies will receive very little interest leaving their money in the bank, so they are more inclined to spend and invest. Also as the cost of borrowing is so low, they are more likely to take out loans for projects and investments. The idea behind such low interests rates is to stimulate the economy.

How strong is the Construction sector at the moment?

According to a Australian Industry Group/Australian Constructors Association Construction Outlook survey, they are expecting a 0.4% decrease in total construction value this year, followed by a 4.5% increase in 2017. A major part of this is the mining industry, which continues to decline, however the increased growth in infrastructure (rail, road and telecommunications) much less balance it out, as we can see below. 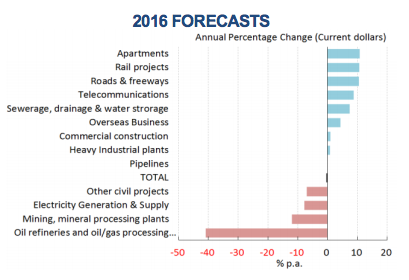 How are you feeling about it all at the moment? Does this make it clearer? Let us know your thoughts in the comment section below.